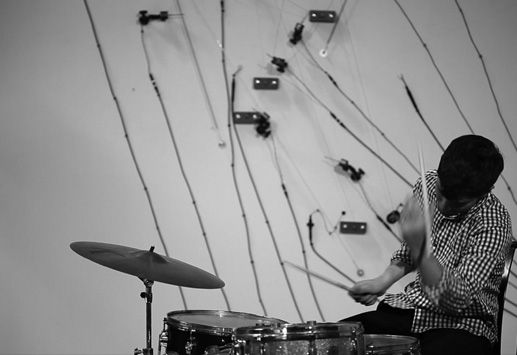 Born in Brookline, Massachusetts, and currently based in New York City, Eli Keszler began playing drums at eight, and composing at twelve. Before finding an interest in experimental music and improvisation, he played in rock and hardcore bands; his work retains an intense physicality and churning, often ferocious energy. He is a graduate of the New England Conservatory, where he studied composition with Anthony Coleman and Ran Blake.
Keszler’s installations employ piano wires of varying lengths; these are struck, scraped, and vibrated by microprocessor-controlled motorized arms, giving rise to harmonically complex tones that are percussive yet resonant. These installations are heard on their own and with accompanying ensemble scores. Said Keszler in a NPR All Songs Considered interview, “I like to work with raw material, simple sounds, primitive or very old sounds; sounds that won't get dated in any way.” In addition, the patterns formed by the overlapping piano wires allow Keszler to create visual components that relate directly to the music, without having to use projections or other electronic equipment. The New York Times said of him in a review of L-Carrier, "Artful, perplexing and endlessly fascinating, it could just as well have been magic."